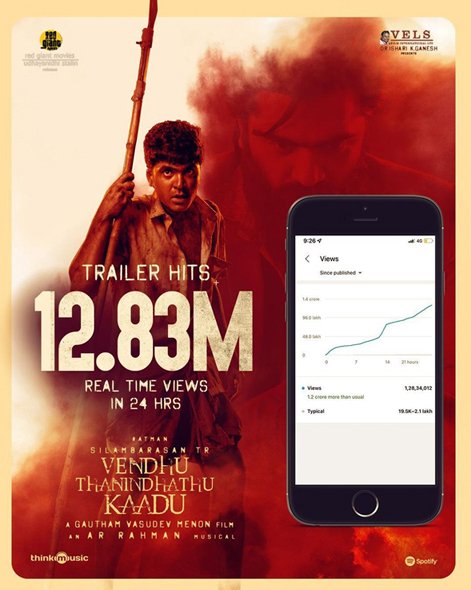 After bestowing us with the blockbuster ‘Maanaadu’, which earned over Rs 100 crores, Silambarasan TR is back with his next release, Vendhu Thanindhathu Kaadu. The trailer of this eagerly awaited crime thriller entertainer has garnered a whopping 12.83 million views on YouTube in 24 hours after being released. Moreover, it is the 3rd most viewed trailer in the Kollywood film industry.

We guess you might have already watched it. The clip was terrific and shows Silambarasan TR as Muthu, who hails from a village to find his identity and has risen in the streets to become a gangster. Simbu rightly proves his prowess as a versatile actor as we see him in multiple phases of Muthu. Gautham Vasudev’s voice narrates Muthu’s routeway into the Mumbai underworld and offers a standpoint about him.

The trailer of Vendhu Thanindhathu Kaadu has elevated the expectations of movie buffs and is anticipated to set a benchmark in the world of cinema. This two-part film’s first half, The Kindling, is slated for release on September 15. The makers have also announced its second part. Moreover, the distributors of the film KGF will be releasing Vendhu Thanindhathu Kaadu in Hindi.